IT operation transformations do not have to be complicated, and they will save you money The last thing executives want is a surprise call from the IT department telling them the SAP system is down. Unfortunately, that call happens a lot more than it should. In a better scenario, the IT team would become aware that something was going sideways hours before making the call, and would proactively work on the problem. And in an ideal world, automation would not only alert the IT team of the expected problem condition, but also avert the problem from ever occurring, avoiding the need for the call entirely.

SAP customers can minimize the manual effort involved in running and maintaining SAP environments by using intelligent technologies to automate repetitive tasks, eliminate human error, and improve the quality and availability of systems and business outcomes. In 2020, big teams of highly valuable people performing mundane and tedious jobs, essentially wasting their talent, are no longer necessary — automation can improve how systems run and enable people to focus on providing business value where it’s needed most. Automation can also help solve the problem of finding low cost labor to perform manual, repetitive tasks in today’s super competitive market with incredibly high inflation, a constant recruitment cycle, and 30-40% churn in some IT departments.

A paradigm shift has also occurred in much of the IT industry when it comes to administration. In today’s software as a service (SaaS) world, site reliability engineers (SREs), who are analogous to developers in the SAP world, build automations to run in cloud environments. However, there is no administrator role in the SaaS world that is analogous to an SAP administrator responsible for maintaining SAP systems. No one is assigned to maintaining the hypervisor for the cloud environment — there is no such thing as a Salesforce administrator, for instance. Instead, automation plays this role. This shift toward automation serving as the administrator has not yet occurred in the SAP ERP space, however. A century ago, organizations had Chief Power Officers responsible for keeping electricity running in the buildings, and it seems we are at that same point today with SAP systems, where there are employees responsible for keeping the systems running.

According to some benchmarking we did, we found that while the SAP market seems to be inundated with buzzwords such as “digital transformation” and “SAP S/4HANA migrations,” in reality, only 25% of IT spend is allotted to those projects. In fact, SAP customers spend 75% of their budget on keeping their SAP environment running. Depending on the size of the organization, some of these IT departments might have once had several million dollars a year at their disposal for this task. In the current climate, however, IT organizations are hard-pressed to get more budget, so if they want to innovate, they have to move their “run” budget into their “build” budget — by employing automation.

A move to automated IT operations

With the COVID-19 pandemic, nearly everyone pressed the pause button on their projects. But that is starting to change, and we are seeing companies today fall into three main camps.

The first camp includes organizations in industries such as entertainment, airline, and travel — where macroeconomic issues have caused severe budget cuts and in some cases the furlough of thousands of workers — which are simply not spending money on IT operations or business transformations.

Those in the second camp are planning to sit out the pandemic and make do with what they have.

The third camp, which is much bigger than the first or second, is made up of companies that recognize they must modernize their business to succeed. If at first they postponed or paused projects, they have now continued them — not only to avoid sunk costs, but also to reap the business benefits. Within this third camp, there are those that no longer have a discretionary budget to keep their SAP systems running, with those funds now replaced by a business case budget for projects that move the business forward. These companies are investigating plans to present to leadership that will do that and bring ROI back to the business.

From what we are seeing, the appetite to spend money on transforming the business has increased since March 2020. A major reason for this is that the pandemic has forced organizations, such as manufacturers and retailers, to recognize that they need to immediately invest in digital transformation projects. When retail stores had to shut down, for instance, some realized that they had no working online delivery capabilities. Manual systems were fine until the doors closed to customers and business operations came to a halt. As a result, a tremendous number of businesses were forced to transform.

This is where Avantra can help. At the core, we have a master system that provides SAP customers with a single pane of glass for looking at all their systems and identifying problems — for example, configuration or point in time issues that require attention, such as a full file system or a malfunctioning interface — and resolves those problems through automated notifications, workflows, and self-healing. We provide transparency to our clients and visibility that they can share with their service provider, business units, and team, so they can make an assessment based on an agreed set of what is acceptable and what is not. We offer full-stack automation, where we automate everything that happens across the stack, such as downtime.

One of our clients, Zappos, has scheduled downtime at 2:00am. Previously, the team had to wake up at 2:00am to shut down the systems, wait two hours for the maintenance to complete, and then bring the systems back up again. With Avantra, those types of manual activities can be automated.

We recently asked our customers about their highest priorities and the tasks that take the most time. Over the next year, we are working our way through building out capabilities to address what they shared, with an end goal of automating everything that our customers do repetitively. Of course, a major priority for SAP customers is ensuring the security of their systems.

A focus on security

SAP customers have security concerns, such as whether the system was set up correctly, if it is secure, and how to identify vulnerabilities. The out of the box security elements provided with public cloud offerings are not enough to meet the level of security required for critical SAP landscapes. To help customers close this gap, Avantra follows an approach that is both different from and complementary to others — we don’t provide an audit, but rather real time monitoring that helps ensure the necessary parameters and certificates are set in a highly secure way.

It’s not policy that causes most security problems, but rather simple mistakes and human error. For example, in the movie Jurassic Park, the security system is turned off as dinosaurs are smuggled out of the building in a clearly malicious, intended breach. In reality, that is not how security holes are opened. More often than not, someone gets sloppy and forgets to close a hole they opened to perform a necessary task, such as changing a parameter that made the system insecure. Avantra’s automated monitoring flags that change, identifies the severity of the problem, and logs the information down to the level of when the change was made and by whom. 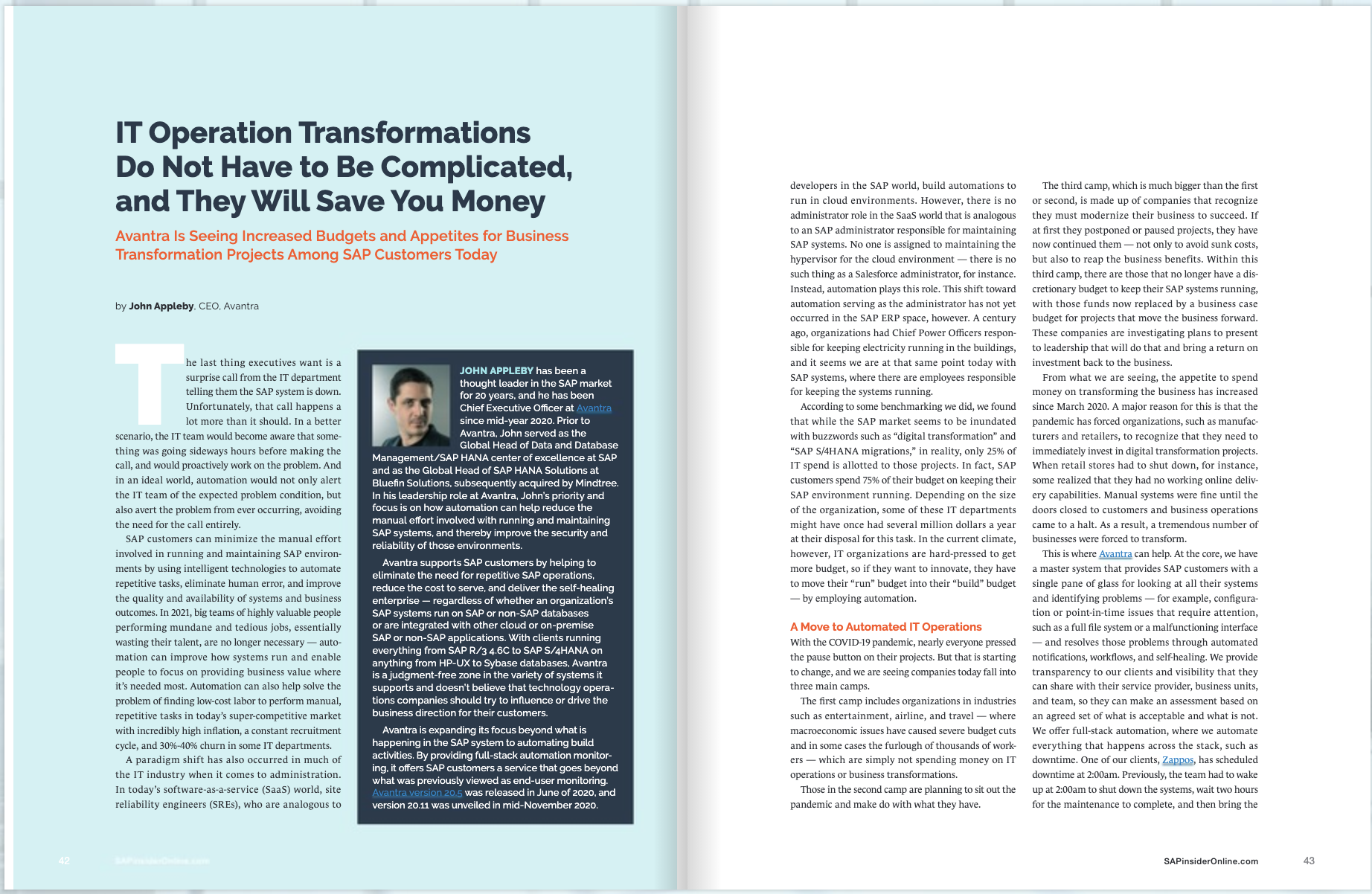 The security that comes with templatized and immutable environments aren’t possible in customized landscapes such as SAP environments. These systems must be constantly monitored, and audit rules need to be continually reviewed and updated as new functionality becomes available. A one-time security audit will tell organizations where they are today and perhaps help them put some process changes in place, but that’s very different from automation that can identify a specific component within an SAP system that is insecure due to a vulnerability, and then alert the business user responsible for that system. For example, a team member at Zappos would receive a message asking for authorization to take down the system at 2:00am for automatic patching, and then receive another message after the system goes back up, according to the workflow.

In the current climate, workflow engines are necessary to keep environments secure, and I believe that the hacking of enterprise systems is the next big security problem on the horizon. While web systems and firewalls have been secured for 20 years now — thanks to F5, Juniper Networks, and other Cisco pioneered technology for securing perimeters — the core of the enterprise hasn’t yet been secured in a similar way. The way to combat this is by investing in innovation, such as automation.

Invest in automation and free up money for business transformation

Many decision makers today don’t fully understand how important it is to invest in automation so they can focus on more value added work for the business. While IT operations might not seem like an exciting area, it is a priority for senior IT and business leaders. They need to reduce the cost of IT because they won’t get the budget from anywhere else, and they need to pass this message down through the chain and help others build a business case to secure funds for these projects.

A belief in autonomous service providers

Roughly half of Avantra’s customers are service providers, and service providers typically have pools of resources that work on certain tasks — for example, they might have infrastructure, network, Basis, and functional teams performing a lot of manual work. With service providers supporting hundreds or thousands of customers, reducing this manual work becomes even more critical than it does for an individual enterprise, because the costs of those resources and manual activities compound. We believe that organizations should be able to set up SAP systems in such a way that they become autonomous, in the same way that a car can be. We are currently working on a rollout with a service provider to deliver that vision, and we are seeing some compelling use cases.

Instead of the traditional approach to system support, which generates thousands of emails and leads to alert fatigue, this service provider can go into a portal and flag a system, which automatically shuts off the system so it can undergo the necessary work. This service provider can perform this automated system shutoff for all its customers’ (many thousands of customers) systems, saving massive amounts of time. The organization will be in a position shortly — with the kernel update module in our forthcoming release — where it can enable that automation across all its applications and spin up systems automatically with the press of a button.

The organization no longer needs big teams of people to perform manual work, but instead has an SRE who builds the autonomous service and root cause analysis professionals who identify and resolve problems before passing the resolution back to the SRE. The SRE then builds an automation so that when the issue arises again, it self heals. This company will have a dramatically lower cost to serve than anyone else in the industry. And now it has interesting commercial decisions to make: Should it now focus on making more money, lowering cost or winning more business? That’s a nice problem to have.

The partnership will assure actionable, data-driven insights to the SAPinsider community