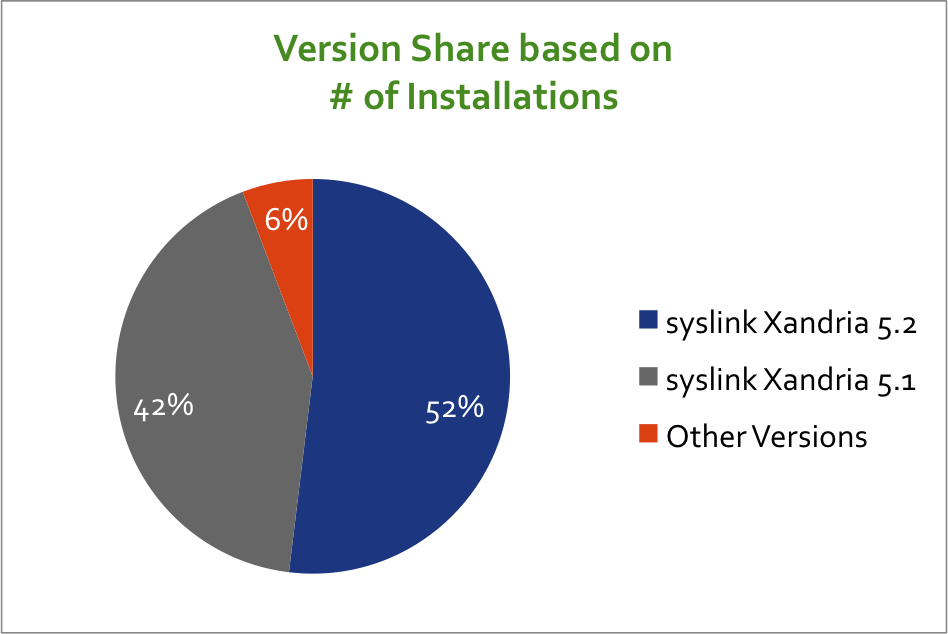 For the first time in history the number of managed objects by syslink Xandria exceeds the number of 20,000. These 20,000 objects, Servers, SAP Applications Servers, and Databases, form more than 6,000 SAP Systems. In other words:

As manufacturer we always appreciate if our customers use the latest release of our product. We spent not only a lot of efforts in developing new features, but also a lot of heart and soul. More than a half of the syslink Xandria installations has already adopted to the latest version 5.2, which is available for six months. This version is the first to provide dedicated management functions for SAP HANA, and it is eventually used on more than 20 systems until now. In relation to the number of managed SAP Systems, the share of version 5.2 is 75% already.

Although our approach to System Management is quite industry independent, usage is higher in some industries than in others. More than 40% of all syslink Xandria installations are driven by SAP Service Providers. That’s where we have our roots, and that’s the customer segment we focus on from the very beginning. The Automotive industry came in second by 25%, followed by the Retail industry with 18%.

Interesting fact: These are industries forced to operate a high level of cost effectiveness. And these industries decided for syslink Xandria although there are competitors where no license fees apply. From our perspective these companies confirm that the Total Cost of Ownership (TCO) in fact is less than the ones of our competitors.

For the statistics enthusiasts: The average syslink Xandria installation manages some 120 SAP Systems. But almost one third of all installations are even bigger. Especially in the Service Provider segment 500 to 800 managed systems per syslink Xandria server can be found. Our efforts put in high scalability of the product have paid off, obviously!